The Ultimate LIP Service for Dalits

The thoroughly reactionary varna and caste system has hounded Indian society for thousands of years. The varna and caste system was sanctified by Hindu religion and by Vedic scriptures. The worst affected by the caste system and its social oppression have been the dalits, or atishudras, or scheduled castes. The stories of Shambuka in the Ramayana and of Ekalavya in the Mahabharata are classic testimonies of the non-egalitarian nature of Hindu society in ancient India.

Reservation should be extended to dalit Christians.

1. LAND REFORMS: The central and state governments must immediately set in motion a process of land reforms whereby land will be redistributed to the landless agricultural labourers and poor peasants gratis. All loopholes in the present laws must be plugged. All schemes to reverse land reform legislation and give away land to multinational corporations and big business houses should be scrapped forthwith.

Such Scandelous Propoganda should be exposed and resisted. This is effort of CPM to divide and rule the Hindu Society

- On one level CPM reminds us of Shambuka & Eklavaya. But it conveniently forgets that Maharshi Ved Vyas wrote the Mahabharat(which also contains the Baghavad Gita) was the son of a fisher woman ; Valmiki who composed the Ramanaya was once a highway robber and was from fisherman’s caste ; Chandragupta Maurya of the Maurya Dyanasty originates from Muria, a tribe which used to collect Peacock (Mor) feathers ; and today’s Amrita Anandamayi, who hails from Kerala’s fishermen caste. All of them were sudras. That means two of the the greatest scriptures were written by sudras, the greatest of Emperor in India was emepror. So is now one of the most reverred gurus.

- On reservation of Dalit Christians: This is really Outrageous. It was my understanding that there is no Dalits in Christianity. Christianity sought converts on the plea that it did not discriminate between believers, and hence low caste believers would loose the social stigma of their original caste. Dalits who were lured to the Christian fold to better their social, economic and educational status should rethink their move and return to their traditional cultural moorings for such benefits

- On Land Reforms: CPM should put money where there mouth is. In west Bengal, right at the moment Salem group of Indonesia,is being given 5,000 acres of Agriculture land in Molla’s home district South 24 Parganas, similiarly 1200 acre being given to Tata Motors, 250 acre had been given to car-makers Honda Motor COmpany, 297 acre to Maruti Udyog and 250 acre to Toyota to set up manufacturing units in other states.

- Intercaste Marraige: I have not seen more Hypocrisy than this. EMS Namboothiripad was the Father of CPM in India. Namboothiripad is a brahmin caste. His both Children Married other brahmins. This is same for other leaders in CPM. Every leader of CPM is calleds by his caste

THE ULTIMATE IRONY, IN 100 YEARS OF CPMS EXISTENCE IN INDIA NOT EVEN A SINGLE DALIT HAS BEEN APPOINTED TO POLITBURO OF CPM
Posted by Panchajanya at 1:50 PM No comments:

This is excert from one of the news letters of CPM. It is published in Peoples Demoracy Vol. XXV August 26, 2001.

We lost 13 ZPTC and 64 MPTC seats comparing with the past elections. We had alliance with the TDP in the past and won 358 MPTC and 28 ZPTC seats. We contested 1073 MPTC and 80 ZPTC seats in these elections and prevented the contest with the Congress(I) in 17 ZPTC seats and 233 MPTC seats of this. We bagged only 103 MPTC and 3 ZPTC seats. The rest of the seats were bagged by contesting with the Congress(I) and the TDP. These were the first elections after 1999 Assembly elections. Though our party’s popularity had grown with the agitations conducted recently, the results revealed our weakness in transforming our popularity into votes due to lack of party machinery in all places.
Though very limited number, these are certain instances when our comrades worked contrary to our political line. Complete details are yet to be reached.
It is clear that out party mass base is still weak. Only with the unleashing of militant struggles in a big way, our base will be strengthened.

In the publication, CPM gives a clarion call to launch a "MILITANT STUGGLE" to increase their presence in AP(can we say capture power?). If SIMI, LeT can be banned for launching Armed struggle against union of India why is CPM spared?
Posted by Panchajanya at 12:57 PM No comments:

Not so Proletariat afterall

The groom arrived in a cream-coloured Mercedes to the stunningly decorated venue. Over 1,500 guests were entertained by a rock band from Delhi and singers from Mumbai and served a dozen different cuisines.

At the tony Harsheela Resorts spread over 8 acres in Mullanpur, on the outskirts of the city, a wedding planner from Delhi choreographed a grand wedding.

The catering team from Chandigarh had 250 cooks and waiters

Guess Whose Wedding was it.

Read Here
Posted by Panchajanya at 2:02 PM No comments:

Guess Who is the IT minister in kerala.

YES NONE OTHER THAN THE GREATEST ACHUTHANDAN.

Lets see his qualifucation to head IT Department:-

- The guy who led agitation to Ban Computers from Kerala

- The guy who led agitation against Internet City

In Kerala, the poor mens party CPM is a Rs 4,000 crore business group.

In Kerala, the CPI(M) is a Rs 4,000 crore business group. The party runs a TV channel, rubber factories, tobacco units, is building an amusement park. And even has NRI partners.

Among the investors for Kairali TV Channel are Wahab whose business extends from trading to real estate, Bahrain to Saudi Arabia became a Rajya Sabha member in 2004 courtesy the Muslim League. Other was Manichan who was arrested four years ago, following some deaths in a hooch tragedy in Kerala

I can still live with it but the most Outrageous was their Water theme Park. Yes you heard it right the CPM is the proud owner of a modern water theme park in its bastion in north Kerala. Its a 25-acre hilly terrain located 15 km from the town at Parassinikadavu. The park will boast of 14 water rides, 12 dry items, children’s play area, a 35-ft high artificial waterfall, open air theatre and a music fountain among other things.

CR Neelakantan, an environmental scientist, says the park will need nearly 3,00,000 litres of water every day. "Even if they resort to recycling, they will have to bring in 30 percent fresh water daily," he says. Neelakantan is not convinced the park's needs would be met by water harvesting. "Theoretically, three crore litres of water is available from harvesting on three acres. This is simply not enough for running a water park. They will have to tap groundwater or surface water. I am sure they are eyeing the nearby Valapattanam river for their needs," he says.

It would be interesting to to know that this is the same party which was in forefront of agitation against Coca-Cola in Plachimada for using groundwater.

NEWS
Posted by Panchajanya at 7:16 AM No comments:

The case was registered by the Directorate of Revenue Intelligence. Mr. Wahab was the second accused in the case. The prosecution case was that the first accused Fazal Rahman had imported a Mercedes Benz car from Dubai in 1998. An agency was engaged for clearing the cargo. Meanwhile, the Intelligence Officer of the Directorate of Revenue Intelligence was tipped off that documents produced for the import of the car were forged. The DRI intercepted the vehicle at the car complex of the Thiruvananthapuram airport.

- P.V. Abdul Wahab was elected to the Rajya Sabha from Kerala in March on the Indian Union Muslim League ticket and had tactit support of CPM

Talk About convergences of Interest
Posted by Panchajanya at 7:06 AM No comments:

This Blog Featured in Times of India 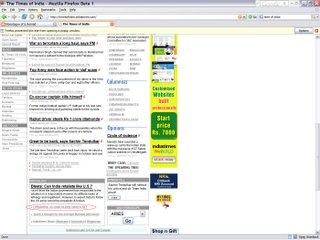 I have same Blog in the time of India Blog site. It is featured in Times of India. Thanks for them.
Posted by Panchajanya at 6:28 AM No comments:

The Spirit Mafia
10,500 litres of spirit was siezed from from the wife's house of M. Bhaskaran, party Alappuzha district committee member and Pathiyoor panchayat president, at Kariyilakulangara.

The Police Party Attacked. CI seriously Injured
S. Jayakumar, Excise Circle Inspector was seriously injured in an attack by an armed gang during a surprise raid on a secret spirit godown in Kariyilakulangara in Alappuzha district. The raid was on house by a local leader of the Democratic Youth Federation of India, Aji Kumar. He continues to be critical and continued to be on ventilator. The condition of three other officials who were attacked was improving.

News
Posted by Panchajanya at 1:02 PM No comments: