Even Animals are not safe under CPM rule

The latest victim of CPM hooliganism is a dog. His only crime being he belonged to BJP activist 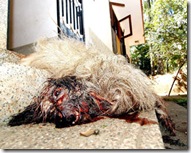 This is not the first time CPM gave political colours to animals and showed their ire on them.

In 1993, it was a strange case of CPM goons taking out their venom on snakes. CPM 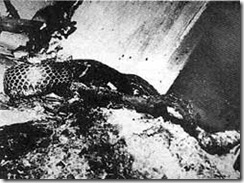 workers vandalised and set fire to the Parassinikkadavu Snake Park in Kannur. The reason for the wanton destruction of what was one of the finest snake sanctuaries in Asia, was the defeat of the CPM nominees in a recent election to the governing body of the A K G Memorial Cooperative Hospital. The election was won by candidates of the breakaway CPM wing, headed by M V Raghavan, who is also president of a charitable society that manages the snake park.
The two hours of vandalism took a high toll -- rare species of reptiles, including 12 cobras, two king cobras and monitor lizards; migratory birds, such as painted and grey storks, and peacocks, vultures, eagles, several mynah species and rabbits were burnt to death. Some snakes that escaped the flames were stoned to death by CPM workers.

In 2001 , the animals in Parassinikkadavu Snake Park again were victims of the revenge drama played out by the CPM and its former leader M.V. Raghavan in northern Kerala. 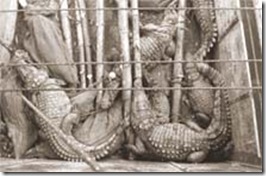 The posse of 150 odd policemen who encircled the park at 4.30 in the morning had been told just one thing. Make sure that no one would hamper the wildlife personnel from locking up the park. They also had to help out the wildlife officials to pack up the snakes in sacks, tie up full grown crocodiles on to wooden logs. Some of the crocodile hatchlings were dumped into a gunny bag. The hired hands showed little mercy while capturing the animals. The snakes were pulled out by their tail, the crocodiles tied to bamboo poles. They were all then packed tightly in gunny bags.

Raju, the lion-tailed macaque, which had suffered burns when the CPM cadre vandalised the park in 1993, created a scene before being overpowered with an injection. An unconscious Raju was bundled into a tiny wooden cage.

The idea was to drive them to Wayanad and Palakkad districts and release the animals — many of them tamed and had lived only in cages — in the forests of Western Ghats. The plan came unstruck as Mehr Singh, who in private circles claims to be a classmate of the CPM general secretary Harkishen Singh Surjeet, could not get clearance from the Taliparamaba magistrate to transport the animals

Per high court order when the gunny bags were opened on Tuesday morning to sent the crocodile hatchlings back into the swampy pit inside the park, 18 of them were already dead. One more died after it was released in the swampy pit. The new-born crocodile tried to breathe fresh air. But it failed. It breathed its last soon after it was set free.

As on Thursday, the count shows 23 crocodile hatchlings, a monkey, a cobra, a white necked stork, one painted stork and a wood owl. Few animals, among them king cobras, a lion-tailed macacque, are still nursing their injuries. The only solace for a shocked public in Parassinikkadavu and in Kerala is that the killings in Kannur this time is restricted to animals.

Its a Strange world!

Posted by Panchajanya at 1:37 PM

Unknown said...
This comment has been removed by the author.
1:26 PM

Unknown said...
This comment has been removed by the author.
1:30 PM