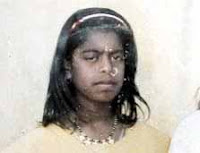 On December 18, teenager Tapasi Malik, a leading agitator of the anti-land acquisition movement at Singur was found in flames at Bajemelia.Tapasi, the only daughter of Monoranjan Malik, a sharecropper and a fish trader, had stepped out of her small house in Bajemelia, in Gopalnagar mouza, around 4.30 am to relieve herself in the field.Some 45 minutes later when she didn't turn up, her mother Molina Devi went out looking and spotted a ball of fire about 350 metres away. As she rushed towards it with her sister-in-law Bandana, she discovered that it was her daughter who was in flames.Tapasi was lying on her back with her entire torso in flames. Seeing her daughter in that state, Molina Devi became hysterical and started screaming, bringing other villagers rushing to the spot.

Tapasi Malik was first strangled, which probably killed her, and then dragged to a pit and set on fire to ensure that she was dead.

CPI-M’s Singur zonal committee secretary, Suhrid Dutta, was arrested by the CBI in connection with Tapasi’s murder, days after party supporter, Debu Malik, was nabbed for the same case. Dutta played a key role in the acquisition of land and construction of the boundary wall for Tata’s project that will build the Rs 1 lakh car.

Its not surprising that before the CBI took over the case, West Bengal police and CID had claimed that Tapasi had committed suicide.

CPM Leader Jyothi Basu was quick to denounce CBI, he said 'When I was the chief minister I saw that the CBI and RAW were never in favour of us.

Two of the girls, aged 9 years and the third, 8 years, were sexually abused after Sudhakaran summoned them to attend a Balasanghom programme of the party on Sunday. There were complaints that the accused had earlier attempted to sexually molest the girls.

Posted by Panchajanya at 9:00 AM No comments: